It’s been described as one of the City of London’s most desirable fine-dining restaurants. But would Italian eatery Caravaggio live up to the hype?

I dined out tonight with some very dear friends – and we had a wonderful time putting the world to rights at an Italian restaurant which none of us had previously visited. What a restaurant this turned out to be. Created in homage to one of the most influential figures of the Renaissance, Caravaggio describes itself as “dedicated to gastronomic excellence, aiming to demonstrate the same dedication to quality and innovation in the field of food and drink as the great Italian masters brought to painting and sculpture”.

From the outside, the restaurant looks quite imposing, probably due to the fact that the building used to be a banking hall. That said, most of the original interior has been removed, with just its ornate high ceiling, complete with Art Deco light fittings, remaining. Caravaggio’s designer, Tony Thomas, has opened up the space and extended an existing gallery that now runs around the room at mezzanine level, providing a second tier of tables. A long, marble-topped bar by the entrance provides a beautiful finishing touch.

Formally opened by Luciano Pavarotti in 1996, Caravaggio can be found in the heart of the City of London, and I’m told it has a very loyal clientele. I can see why – not only were our food and wine delicious, but the service was incredibly friendly. Having received a very warm welcome, we were given as much time as we wanted to study the wine list, eventually plumping for a bottle of the house white and a bottle of the house red (boring, I know, but we didn’t regret it). Great value, for the City, at £19 a bottle, these house wines – both of them from Sicily – turned out to be excellent.

We then spent ages choosing our food, and again no pressure was put upon us to order or to make any kind of decision – in fact, our lovely waitress was more than happy to talk us through every single dish on the (extensive) menu. And the decision-making was indeed difficult – Caravaggio’s menu features dishes from a number of Italian regions, including Tuscany and Sicily, and incorporates both traditional and modern methods of cooking.

We got there in the end, with three of us opting for the sea bass ravioli and one for the sautéed monkfish with asparagus and – as with the wine – we were in no way disappointed. Beautifully presented, our main courses reduced us to a blissful silence while we hoovered them up – surely the highest praise possible.

Fortunately, we just about still had room for dessert, which again was delicious – if you’ve never tried a chocolate bonnet pudding before, I heartily recommend that you do so as soon as possible. A selection of cheeses followed, together with some (complimentary) petit fours accompanying our coffee, leaving us replete and very contented indeed. Truly, we had dined like kings.

One final note: the restaurant makes a point of welcoming solo diners, to the point of mentioning them on its website. From my own experiences at other establishments – and this is a view backed up by many of my fellow foodies – I know that this is not always the case, so full credit to Caravaggio for bucking the trend. Credit to it also for not participating in the infuriating table-turning prevalent in so many of London’s restaurants.

This was a fantastic night out at a restaurant full of ambience and at the top of its game from a culinary perspective; I know that I speak for all four of us when I say that I will definitely return. I will leave you with these wise words, which I have borrowed from Caravaggio’s wine menu and with which I am sure you will concur:

“Age, as with glasses of wine, should never be counted.” 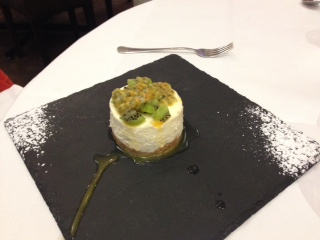 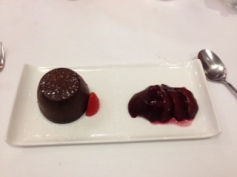 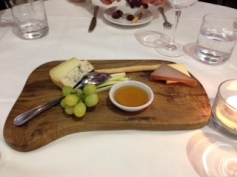