On a quest for knowledge at Piccadilly’s Burlington House, home of the Society of Antiquaries 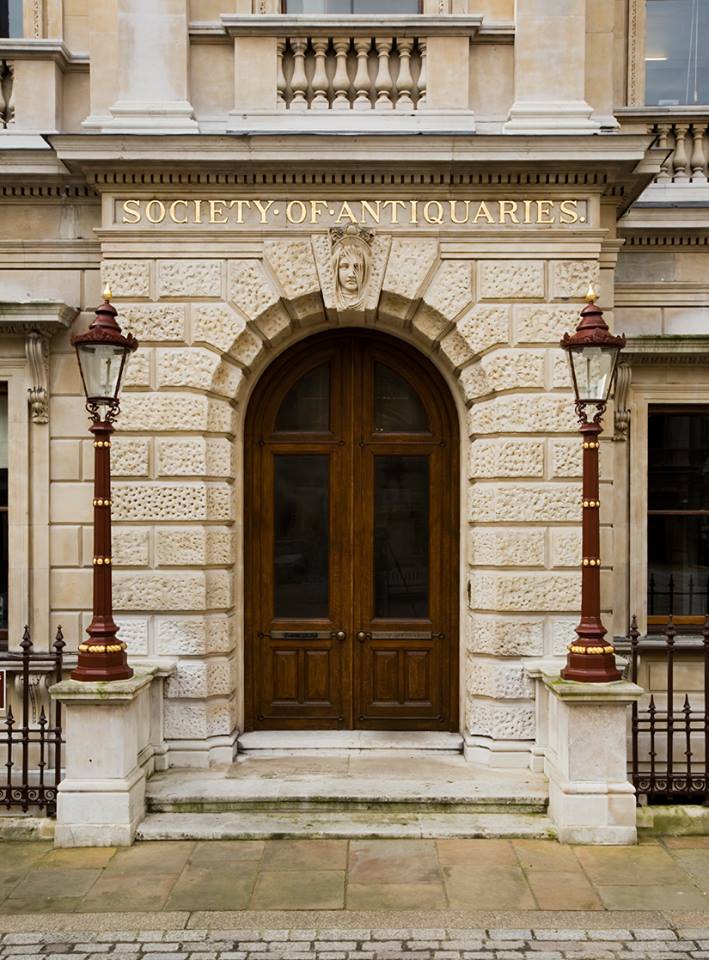 I’ve walked past the Society of Antiquaries’ London home, Burlington House, countless times – but never, before today, ventured inside. Truth be told, I’m not sure I would have been able to tell you exactly what an antiquary is or does (I know: my lack of knowledge is shameful). Today’s visit to the Society’s headquarters, organised by London Historians, changed all that – and a more engrossing two hours I couldn’t have asked for.

Luckily for me, our excellent and highly knowledgeable guide, Anthony Davis, began the tour with a very helpful explanation. I now know that an antiquary is someone who studies and/or collects old objects, and that the Society itself exists to encourage the study of the past. The Society has around 3,000 members, many of them archaeologists and all of them experts in their particular fields. It can trace its origins back to 1707 when, in true British fashion, it was founded in a pub: the Strand’s Bear Tavern. Since then, it has had a number of homes including the Mitre Tavern on Fleet Street, rented rooms in Gray’s Inn and Robin’s Coffee House on Chancery Lane – arriving at Somerset House in 1780. In December 1874, however, the Society was offered a suite of purpose-built apartments in Burlington House, Piccadilly – where it still resides.

Bearing all of the above in mind, we set off on our tour of Burlington House, pausing in its elegant Entrance Hall to admire a brass rubbing of a Jewish Sabbath lamp of the Middle Ages. This lamp is still in the possession of the Society and, indeed, forms part of its logo. A William Morris sofa, on loan from the Society’s countryside abode, Kelmscott Manor, sits invitingly in the Hall – the perfect spot from which to admire the large processional cross also on display and discovered in a field near Bosworth in the 18th century. Thought to date back to the late 15th century, the back of the cross sports an emblem in the form of the sun – the symbol of the Yorks. Very probably, this cross belonged to a rich Yorkist – possibly Richard III’s chaplain.

So much history, already – and the tour had barely got started. Next up: the Meeting Room – one of the more stately rooms in the building and furnished with items from the Society’s former premises at Somerset House, including an exquisite oak clock. This is where you find the President’s Chair, as well as the original hat belonging to the Society’s first president, which tradition dictates is placed on a table in front of the current President at all meetings. This is the room where Fellows are elected, on the basis of being a person of distinction within a specialist field.

Being as fascinated by the Tudors as I am, I was thrilled to spot portraits of some of them hanging on the walls. These include a contemporary likeness of Henry VII and a magnificent portrait of Mary I, which was painted after Mary’s engagement by Holbein’s successor at court. Other of the here are displayed in pairs; I particularly liked the ones of Edward IV and Richard III – the latter being the earliest known portrait of that much-maligned king. Another new fact I was to learn today is that the Society boasts the largest collection of portraits of English medieval and Tudor monarchs outside the National Portrait Gallery and Royal Collection.

I fell in love with Burlington House’s magnificent Library the moment we were ushered inside. Peaceful, light and incredibly airy, this vast working library contains over 130,000 books and journals, dating from the 15th century to the present day. The largest such private collection in the country, it covers British and European archaeology, architectural history, art history and the decorative arts, the historic environment and British local history. Remarkably, the Library survived being bombed by the Luftwaffe in World War II, even though its ceiling was destroyed.

The last stop on our tour was the Fellows’ Room, which has a unique view overlooking the courtyard in front of the Royal Academy. This room is notable for its archive relating to the Society’s antiquarian collections – and for containing items from a number of the Society’s collections of artefacts. These are arranged by the date of their presentation to the Society: up until the middle of the 19th century, the Society was often seen by its Fellows as the most appropriate place to deposit antiquities and pictures.

As I said at the beginning of my post, this was a highly enjoyable two hours. We were lucky enough to be taken on a private tour, but the Society does hold monthly public tours which anyone can attend – as well as an interesting programme of events, most of which are open to non-members. If the opportunity presents itself, I strongly encourage you to visit Burlington House: it is one of those historic gems in the heart of London which deserves to be better-known.