Wellington Arch is one of those buildings that Londoners, myself included, tend to take for granted. Which is a great pity, because there is far, far more to this 19th century landmark than meets the eye – as I can testify, having visited it for the first time earlier today. Slightly embarrassingly, I only became aware relatively recently that you can actually go inside the Arch, which turns out to contain both a museum and an exhibition.

I was also surprised to learn that the Arch was not, originally, connected to Wellington. In fact, to understand its origins we need to travel back in time to 1824, when several grand architectural projects in London were in development, including the rebuilding of Buckingham Palace and a scheme for new railings and gates for the royal parks. In due course, Hyde Park and Green Park were given a pair of gateways facing each other across Piccadilly, designed by 24 year-old architect Decimus Burton – not at all what the general public had originally had in mind, having clamoured for a magnificent entrance-way in to London.

A mere two decades later, Burton’s triumphal arch became the scene of one of the great artistic controversies of Victorian Britain. Supporters of the Duke of Wellington had long wanted to give the Duke a monument to equal Nelson’s Column, and in 1839 the Wellington Memorial Committee appointed Matthew Coles Wyatt as its designer. Sadly for Coles Wyatt, however, this project would prove his downfall. His design for a giant equestrian statue of the duke, on top of Burton’s arch, was controversial and widely-ridiculed; when the statue was erected for a trial period in 1946, most people thought it looked absurd – and having seen photos, I would have to agree. It was eventually taken down in 1883, when the Arch was dismantled to allow the junction at Hyde Park Corner to be widened and moved to the site where it resides today, looking down Constitution Hill.

It was then that Wellington Arch assumed its unlikeliest role yet – as London’s smallest police station. I know: that fact took me by surprise, too. The police officers stationed here managed traffic, oversaw the royal parks and opened & closed the gates on formal occasions. By 1952, seven years before the station closed its doors for good, they numbered ten constables – and a cat, Snook.

Thirty years after Wellington’s statue was removed, a new sculpture was erected on top of the Arch, which remains there to this day. The masterpiece of Adrian Jones, a retired cavalry vet-turned-sculptor who counted the Prince of Wales (and future Edward VII) among his admirers, the sculpture has since been recognised as a masterpiece of Edwardian sculpture. Sadly for Jones, it did not receive the formal unveiling for which he had longed, and the sculpture received little attention at the time.

Duly educated on the history of the Arch, I wandered upstairs to see the Waterloo exhibition. En route, I paused to gaze at some spectacular paintings of this most infamous of battles; Lady Butler’s 1881 masterpiece ‘Scotland for Ever’, which occupies an entire wall, made a particular impact – I could barely tear my eyes away. 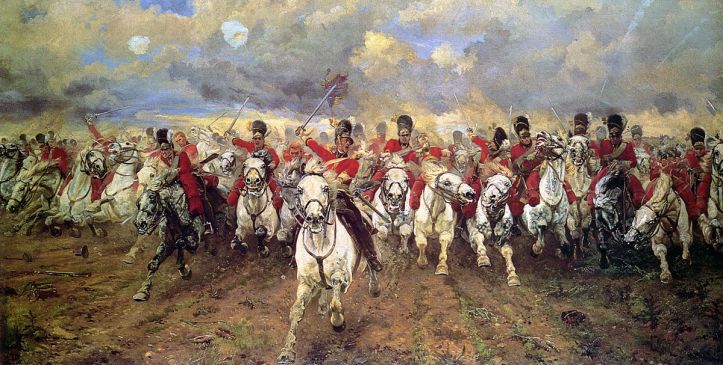 As you might expect, this highly-informative exhibition tells the story of Wellington, Napoleon, Blücher and the road to Waterloo. Beginning with the return of Napoleon from exile in 1815, it then focuses on the subsequent gathering of the armies of the Allies (Britain, Prussia, Austria and Russia) and the events that unfolded therewith – and Napoleon’s eventual downfall. Brilliantly, it describes Wellington’s battle plan versus Napoleon’s strategy, the Prussian Dilemma and the aftermath of the Allied victory, which saw Napoleon wanting to fight on, but prevented from doing so by the French government. There’s a final focus on the mainly positive repercussions of the battle; horrific and unwanted it may have been, it did at least lead to 40 years of peace in Europe.

I was riveted by what I saw & learned today – and could have spent hours in here. In fact, I found the entire Arch fascinating – what an unexpected treat today’s outing turned out to be, especially being able to venture out on to the top of the building and admire the views across London on this gloriously hot and sunny day. Next stop: Apsley House, just across the road in Hyde Park – and once home to Arthur Wellesley, 1st Duke of Wellington, possibly our greatest general ever.