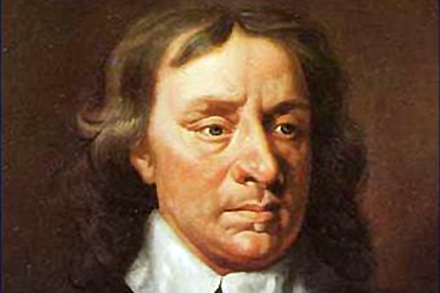 I do love a museum – and the quirkier, the better. The Oliver Cromwell Museum, in Huntingdon, has what I think of the best of both worlds – it’s hugely informative, and you learn a lot while you’re in there, but it doesn’t take itself too seriously and is aimed at children as much as it is at adults.

It also manages to pack a lot into a single room, without being overwhelming. Starting with Oliver Cromwell’s childhood, the Cromwell exhibition/timeline progresses through his school and university days, through his early career as a farmer & landowner and follows his progress as he becomes an MP, soldier and – finally – Lord Protector of England, Scotland and Ireland. It’s an absorbing journey and one which enables you to better understand this influential, yet controversial, individual whose life and legacy divide opinion to this day.

There’s a reason why the Oliver Cromwell Museum is based in Huntingdon – it’s where the man himself was born, and spent his formative years. What’s more, the very building in which the Museum is housed is the same building in which Cromwell was educated: Huntingdon Grammar School, where Samuel Pepys was also a pupil. Astonishingly, the building dates back to the 13th century, when it began life as a Monastic Hospital.

The family into which Cromwell was born, in 1600, was not a particularly well-off one – but it did have connections. Cromwell was a descendant of the Earl of Essex, Thomas Cromwell – Henry VIII’s Chief Minister (until Henry had his head chopped off). As far as I could tell from the exhibition, there was nothing remarkable about his childhood; he was taught by Thomas Beard, a noted clergyman, religious author and thinker, who some think influenced Cromwell’s own beliefs, however as the two fell out later in life, that is questionable.

In 1616, Cromwell gained a place at Cambridge University – and four years later he married Elizabeth Bourchier, daughter of a wealthy London merchant. The couple settled here, in Huntingdon, where they farmed and raised a family. In 1628, Cromwell became Member of Parliament for Huntingdon and in due course the Cromwells inherited Elizabeth’s uncle’s estate in Ely, where they lived for a decade.

There were painful times ahead for the country. Its king, Charles I, who succeeded to the throne in 1625, fell out with Parliament early into his reign, which for its part was marred by religious tensions, unpopular taxes and accusations of tyranny. By 1642, civil war had broken out – and there are number of fascinating pamphlets on display in the Museum, written by both Royalists and Roundheads, which vividly illustrate the conflicting views of the time.

In the meantime, Cromwell had begun forging a career as an innovative and skilled soldier – one who wasn’t afraid to challenge convention. Heavily involved with the Parliamentarian army during the forthcoming civil wars, he oversaw a number of radical changes within its formation. Rejecting the old command structure – which was based upon class – Cromwell instead made officers of men who showed genuine ability.

A devout Christian since childhood, faith continued to influence all areas of Cromwell’s life. As a Puritan (i.e. a devout Protestant), he preferred his men to also follow the Puritan faith – or at least be ‘Godly’. All were given a Soldier’s Bible to take with them on campaign – one of which is on display in the Museum, in near-perfect condition.

By 1643, having proved his skill as a commander in a number of battles, Cromwell was Colonel of the Eastern Association. One year later, he was promoted to Lieutenant General – and it was in this role that he took part in the Battle of Marston Moor near York – a key moment in the defeat of the Royalists.

It is at this point in the exhibition that you come across some of Cromwell’s personal possessions, which bring this slice of history to life in a way that text alone cannot: his brass spurs, gilt bronze stirrups and a pair of immaculate black leather gaiters – there’s even a cannonball, found on the site of the Battle of Marston Moor.

By 1646, Charles I had no choice other than to surrender and Cromwell was well-rewarded for his role in toppling the king. Now London-based, Cromwell was enjoying his joint roles as soldier and politician; although these were difficult times politically, vigorous debates were ongoing within the Army about the future of the country, the monarch and Parliament, leading to the Parliamentary side breaking into factions. Many of these now saw the Army as the enemy.

Taking advantage of this internal strife, Charles formed an alliance with the Scots and in 1647 they invaded England on his behalf, only to be defeated by Cromwell and his New Model Army on 17th August 1648. What happened next has been well-documented: with Parliament still attempting to negotiate with the king, the Army demanded his trial. When Charles rejected a final attempt for peace, Cromwell finally consented. Having refused to plead, Charles was executed on 30th January 1649 at Banqueting House. While the country held its breath, the House of Commons established a republic in which it was the sovereign body – and abolished the House of Lords.

As for Oliver Cromwell, he was made Lord Lieutenant of Ireland, where he would command a number of expeditions in a quest to defeat the Irish. These included the battles of Drogheda and Wexford, where he came in for severe criticism for his harsh tactics. Cromwell would go on to lead an army against Charles Stuart, son of Charles I, who had been crowned king in Scotland, but eventually fled to Europe.

This continued military success led to Cromwell being named Lord Protector in December 1653, from which point the royal palaces of Whitehall and Hampton became home to the Cromwell family. Some of their furniture is on display at the Museum, including this beautiful Florentine Cabinet and equally lovely Apothecary’s Cabinet: 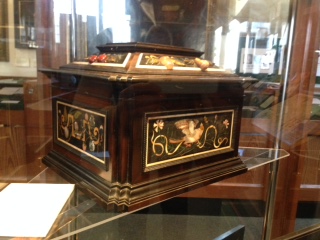 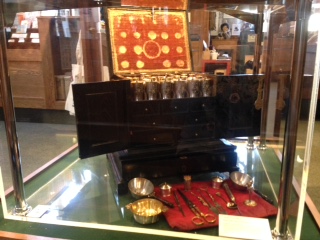 He would fulfil this role only for five years, though, as during the summer of 1658 Cromwell fell ill with malaria. Already weakened, following the unexpected death of his favourite daughter, Elizabeth, Cromwell died on 3 September 1658 – and was given a private funeral at Westminster Abbey, as well as a royal funeral.

The exhibition concludes with the proclamation of Richard, Cromwell’s oldest son, as Lord Protector – the Proclamation itself is on display in the Museum: 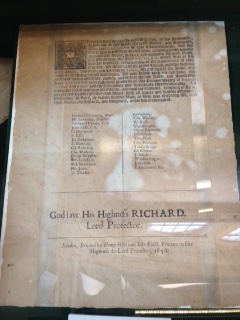 Ultimately, Richard would be unsuccessful as a leader, lasting only a matter of months as Lord Protector; in due course the monarchy would be restored. That, however, is a story for another day. For now, there is so much more to learn from this charming museum about the life of its namesake – and this incredible period of history – that I feel certain I will return.