A chance encounter leads to a memorable Italian supper

In need of sustenance after watching a gripping – and gruelling – production of ‘Boudica’, I encountered a restaurant I hadn’t heard of previously, by the name of Pulia, on Stoney Street. I love Italian food and will take any opportunity that presents itself to sample some, so needed very little persuasion to enter into this bright, welcoming environment.

Pulia, it turns out, was founded by Apulian Michele Lastilla in 2012. Michele’s stated aim is to bring that region’s culinary traditions to the world: accordingly, this Southbank-based eatery has sister restaurants in Milan and New York. Michele collaborates with internationally-renowned Apulian chefs to conceive dishes and products faithful to Pulian traditions – consequently the menu is interesting and well-balanced, featuring plenty of vegetarian options.

After some deliberation, I plumped for the scialatelli con zucchini e menta: pasta with courgettes, mint and caciocavallo cheese. It was delicious – light and moreish – with the clever addition of the mint preventing the cheese from being too cloying.

Feeling both contented and relatively full, I was going to bypass dessert, until the rather charming waiter persuaded me that yes, actually, I did need a slice of cake with my peppermint tea. This turned out to be my only error of the afternoon: the gluten-free lemon cake, which looked so attractive on the counter (Pulia also has a shop, in the same vein as Carluccio’s) tasted dry and far from lemony. Having now had several dodgy (read: inedible) experiences, I’m yet to be convinced by gluten-free cakes – or by gluten-free desserts in general. 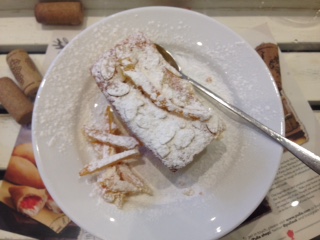 Still, it’s not as though I was especially hungry by then – and I enjoyed everything else about Pulia, in particular its ethos, which is to use small, local producers – all of whose products are stocked in the shop. I will definitely return and next time, I have already decided, I will forget about calorie content and tackle the tiramisu for dessert.