The Royal Academy of Arts’ ‘Matisse in the Studio’ is a real treat. Essentially, it tells the story of Henri Matisse’s home environment – or studio – and how the objects he kept around him inspired his work. From ornate chairs and tables, to wall hangings, vases and sculptures, Matisse surrounded himself with beautiful items, many of which he collected on his overseas travels, that stimulated his creativity.

Excitingly, a number of these items are on display in this exhibition, alongside the paintings or sculptures they inspired – and it is fascinating, seeing them in the flesh. For example, two exquisite silver chocolate pots are placed next to ‘Bouquet of Flowers in a Cup’ (1902) and ‘Safrano Vases at the Window’ (1925) is positioned next to the Andalusian vase featured in said painting.

Matisse, so we learned, actively sought out objects such as these, stating, “The object is an actor. A good actor can have a part in ten different plays; an object can play a role in ten different pictures.” Accordingly, some of his object-actors appeared time & time again in his work, including those chocolate pots, a lovely Venetian, shell-like chair, a striking pewter jug and a North African painted table. He described himself as “obsessed” with the Venetian chair, which he purchased in 1942 from an antiques shop, going on to explore its shape and features in a sequence that ranged from decorative drawings to his 1946 painting ‘Rocaille Chair’. 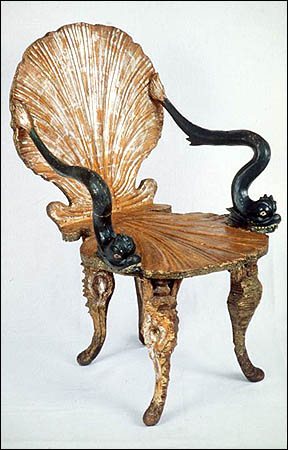 I hadn’t realized the extent to which Matisse was influenced by the art, textiles and furniture of North Africa, the Middle East and the Far East. He loved their vivid colours and, particularly in respect of African sculpture, the freedom to be true to one’s instinct and feelings.

Islamic design, too, was a huge influence – having been profoundly affected by a major exhibition of Islamic art in Munich in 1910, in due course Matisse began to include objects from Islamic culture in his paintings.

In 1917, he moved from Paris to Nice, where he would spend the remainder of his career. He used furniture, textiles and objects from those parts of the world to “dress” his Nice studios, creating elaborate ‘sets’ of rich visual effects to portray in his works and imitating the architectural interiors that he had admired during his travels in Spain, Algeria and Morocco.

I loved the Mboom – royal – masks from the Kuba kingdom that we saw today. So intricate and embellished are they in their design that they are like works of art in their own right; you could spend hours admiring them. For his part, Matisse reveled in their apparent inscrutability: “Expression for me does not reside in passions bursting from a human face”, he once said.

For me, one of the most striking paintings in this exhibition was Matisse’s 1916 portrait of a woman called Laurette, who he met when she visited his studio looking for work. Matisse painted Laurette more than 50 times in less than a year; this particular portrait, entitled ‘The Italian Woman’, was the first – and her flattened brow and hollow eyes exemplify Matisse’s interest in the way that African artists simplified the features of their masks.

There is much more to ‘Matisse in the Studio’ than I have described above, including an interesting section devoted to the coloured cut-outs described as “the defining achievements of Matisse’s last years.” Heavily influenced by Chinese characters, they manage to be both eye-catching and thought-provoking.

I learned a lot today, both about Matisse as a person and about his extraordinary work – and the way in which the two intertwined. The exhibition runs until 12th November 2017 and provides a fascinating insight into Matisse’s creative processes; do catch it if you can.