Inside the highest court in the land: the United Kingdom’s Supreme Court 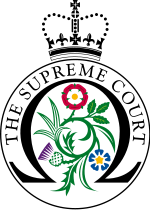 I’ve always been fascinated by the world of law. I love its air of mystique: combined with centuries of history and tradition it seems such a rich world.

Last year, I went on a tour of the Royal Courts of Justice – one of London’s most striking buildings – and its interior was every bit as interesting as I had hoped. So, I didn’t need to be asked twice to explore the Supreme Court of the United Kingdom, based in Westminster.

After admiring the relief frieze on the exterior of the building, which depicts historical scenes including King John handing the Magna Carta to the barons at Runnymede, we began our tour in Court 3. This is a far cosier setting than you might imagine, despite being the home of the Judicial Committee of the Privy Council – and is also where we learned a little about the Supreme Court, its history and its remit…

Now nine years old, the Supreme Court is the final court of appeal in the UK for all civil cases, and for criminal cases for England, Wales and Northern Ireland. It hears cases of the greatest public or constitutional importance, affecting the whole population. This is a Court of Appeal for judgements; a case must have come through all other relevant courts first. Critically, the questions asked here relate to the law itself and how it has been applied – not to evidence or witnesses (so there is no dock or witness stand). The Supreme Court Justices examine the particular law in question and, if necessary, send the case back to the lower court from where it has come.

Arriving in Court 2, we were struck by how different it was from Court 1 – but then, we had moved away from the Grade II-listed part of the building. Both the furniture and the décor are far more modern – and were designed by the Justices themselves. Overlooking the room is the emblem of the Supreme Court which features the symbols of all four of its jurisdictions, including a Tudor rose. The carpet, somewhat unexpectedly, features a pop-art design and was designed by Sir Peter Blake, he of ‘Sergeant Pepper’ album cover fame.

I was interested to learn that the Justices sit on the same floor level as everyone else and do not wear robes; nor do the barristers. Apparently, the Supreme Court is viewed by its inhabitants as an informal setting, used for intellectual discussion; it is intentionally non-intimidating. It certainly has the appearance of a working building – the Justices’ desks are scattered with ink-stained post-its, bulging spiral-bound documents and laptops.

Into the upper reach of the building we ventured, up a twisty spiral staircase and past stained glass windows decorated with coats of arms – eventually arriving at Court 1, the largest of the Courts. This marked a return to the traditional feel, sporting wood panelling, portraits with gilt frames, wooden benches and bookcases stuffed with imposing legal volumes. Oh yes, and chandeliers. This Court is responsible for the most complex cases and is staffed by up to nine Supreme Justices, the exception being Article 50, when 11 Justices were present because of its historical and political significance. The John Warboys case review will be held here, too.

Surprisingly, Supreme Court cases aren’t that well-attended by the public, excepting the most high-profile ones. And yet, every single case is open to the public: democracy in action and on view.

I was also surprised to hear that to become a Supreme Court Justice, you follow a standard job application process; vacancies are advertised, in the same way that any other job is advertised. To apply, you must have been a practising lawyer for 15 years or a judge for two years. At the interview stage, all four jurisdictions are represented; successful applicants are recommended to the Lord Chancellor.

The highlight of our tour was undoubtedly the building’s atmospheric, triple height Library. It’s located in the very middle of the building – because it is central to everything that happens here. Quotes from eminent historical figures such as Martin Luther King are carved into the wood panelling and it’s where, while this building was being rebuilt, bones were discovered. Following much consternation, they turned out to be horse bones, not human – a meat market existed here centuries ago. Had they been human, and this a burial site of historical significance, construction would have been halted and a new location sought.

‘Law and nationhood: South Asia at 70′
A bonus of being in the building today was visiting a small but fascinating temporary exhibition about Indian independence. Commemorates 70 years of independence, it highlights the shared legal background of Ambedkar, Gandhi, Jinnah, Krishna Varma and Nehru, drawing on little-known documents from their respective Inns of Court (each studied law in England and was called to the Bar during the late 19th century and early 20th centuries).

The exhibition explores the complex colonial reaction towards its ‘barristers’ turning into opponents of their own teachers and the contributions these brave individuals made to the consolidation of democracy in their own countries. There are some fascinating artefacts on display, including documents relating to the episode of Varma’s disbarment and subsequent reinstatement at the Honourable Society of the Inner Temple. I loved the black & white film clip of Jinnah addressing the new nation of Pakistan – he was its first Governor General and there are some insightful photos into his earlier life as a lawyer and a magistrate.

As I left the Supreme Court, with a new-found appreciation of how this country’s legal system works, I couldn’t help thinking how appropriate this neo-Gothic building’s location is. Set in Westminster’s Little George Street, it overlooks both the Houses of Parliament and the London Eye: old and new worlds coming together, just as in the Supreme Court itself.