‘Mood Music’, at The Old Vic, proves both timely and compelling 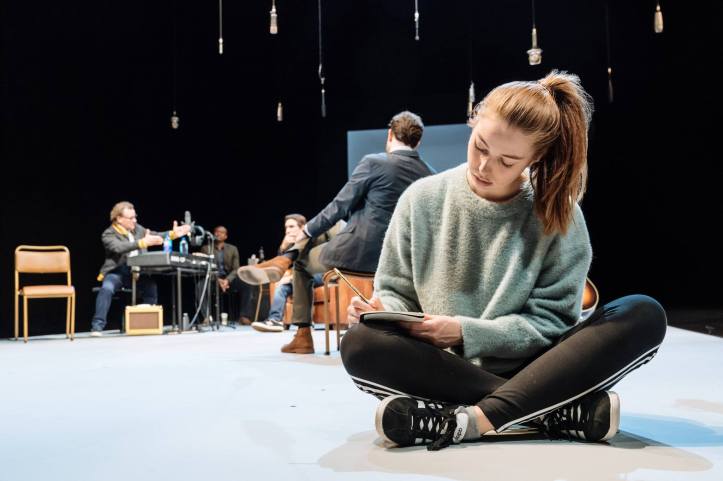 “The music industry isn’t about healing heartbreak and vulnerability. It’s about selling it”. Harsh words – but ones with which it is difficult to disagree.

These words form the premise of The Old Vic’s latest production, ‘Mood Music’, which I thoroughly enjoyed and which was written by Joe Penhall, author of the fabulous ‘Blue/Orange’. This new play focuses on an up-and-coming singer-songwriter, played by Seána Kerslake, and a veteran music producer, played by Ben Chaplin, who are arguing over the rights to a song.

So far, so familiar. However, the play takes us in a different direction than the one you might expect, by introducing a cast of supporting players in the form of the duo’s lawyers and therapists. What’s more, all of the cast remain on stage at all times, regardless of whether or not they are involved in a scene.

Judging by some of the reviews, there has been a mixed reaction to that particular theatrical device. I have to say: I quite liked it. Having all the actors present in the confined space that is “the round” (another departure for The Old Vic) reinforces the sense of claustrophobia integral to the play. It takes you a few moments to adjust, but once you do, the play unfolds intelligently and thoughtfully. I’m all in favour of playwrights and theatres trying something different.

Less successful, however, is the white cube at the far end of the stage in which, during the first act, any actor not featuring in the current scene reposes. I found this distracting and unhelpful; whatever its significance, it passed me by.

There is far more that is positive than there is negative about this play, however, including the uniformly-excellent cast which includes Jemma Redgrave, Neil Stuke, Kurt Egyiawan and Pip Carter. Seána Kerslake brings a touching vulnerability, coupled with an understated strength, to her role as Cat and you find yourself silently cheering her on, hoping that truth will prevail – whilst knowing that, in this cut-throat world, it probably will not. Watching her trust in her mentor crumble proves a wrenchingly sad experience; having lost her own dad aged just 13, Cat’s yearning for a father-figure is palpable.

As for Ben Chaplin, he is a revelation. It would have been easy to adopt the pantomime villain approach to the character of Bernard, but Chaplin holds back from doing so and manages to imbue Bernard with just enough humour and charm for us to not entirely hate him.

Chaplin is helped in that respect by the barbed, telling dialogue, which in this #MeToo era could not be more timely. I doubt many people know this, but Joe Penhall worked as a music journalist before he moved into the world of theatre and that experience undoubtedly informs his script, which is wincingly believable.

Ultimately, of course, there can only be one winner – or can there? I’m not about to give away the ending and instead will encourage you to go see this play and find out for yourself whether youth and self-belief can win out over male aggression and an industry that remains behind the times in many ways.