‘Rewriting the Past’: the world of historical fiction according to Hilary Mantel and Pat Barker

This weekend London’s inspirational Southbank Centre, which is fast-becoming my second home, hosted another literary festival: Man Booker 50. Billed as celebrating 50 years of the finest fiction, I went along to see two of my favourite authors, Pat Barker and Hilary Mantel, in discussion with broadcaster James Naughtie about ‘Rewriting the Past’.

Naughtie kicked off proceedings by declaring that historical fiction is “booming”. A fine historical novel, he stated, crackles with contemporary relevance and reveals the past in rich and satisfying detail.

Hilary Mantel and Pat Barker exemplify the above. But does either of them object to the term ‘historical fiction’? Not anymore, replied Barker. It used to mean bodice-ripping or costume drama – remember those gold foil covers? – but we’ve moved on. Mantel concurred, adding that when she published ‘A Place of Greater Safety’, in 1993, it was to a “general air of disbelief”. However, historical fiction has been “rescued” and is no longer seen as the preserve of women.

What has changed, then, since the gold foil days? Mantel responded that she and Barker have done what “wasn’t quite expected” of female authors: they have embraced the epic. That said, although much has changed over the last few decades, women need to be encouraged to be more ambitious. Barker agreed, adding that it’s a concern that the vast majority of Orange Prize for Fiction winners favour male protagonists. When that changes, we will know that women have made progress.

We were off to a fascinating start and it was clear that historical fiction is something about which these two highly intelligent and articulate women feel strongly. Turning to Hilary Mantel, Naughtie enquired why, in this secular age, people want to read about the Reformation and similar in her ‘Wolf Hall’ books? “We want to know why people would die for their faith”, she replied, simply. What’s more: “The era I write about was a time of nation-making, personified in the break from Rome – and that is highly topical”.

How do you find an angle that has escaped the common retelling? Mantel again: there is all the difference in the world between recorded history – and what actually happened. That’s where your research comes in.

In respect of said research, both Mantel and Barker describe themselves as “meticulous” with their sources, Mantel adding that there does, however, have to be a moment when fiction “takes off”. Facts, she says, are the spur to imagination, but you need some liberty because they soon run out. That’s when your imagination comes in.

Barker concurred, saying that there has to be a balance between invention and the rigour of concern for accuracy. By way of example, in a scene in ‘Regeneration’ when Rivers and Sassoon meet for lunch in Edinburgh, she opted to have Rivers choose poached fish from the menu. Of course, she had no way of knowing what he would have eaten – but having a good knowledge of his physical constitution and various ailments, was able to make an educated guess.

How long did it take Pat Barker to hone her craft in this way and learn the tricks of the trade? “When I realised I could write dialogue”, Barker replied, instantly. ”Even now, if I can’t get my characters to talk, I know the book won’t come to anything”.

A ripple of amusement ran through the audience when Naughtie, turning to Hilary Mantel, asked her teasingly why the long-awaited conclusion to her ‘Wolf Hall ‘trilogy is yet to hit the shelves. “It’s coming!” she confirmed. ‘The Mirror and the Light’ will be published next year (2020).

The problem with a trilogy, mused Barker, supportively, is that that the pressure mounts with every book. Naughtie: “Was it ‘The Ghost Road’, then, that carried the weight of expectation?” “Yes”, Barker replied. “If I’d ballsed it up, it would have invalidated the first two novels”.

It’s important to remember, added Mantel, that the past is not a rehearsal for the present. Real-life characters have to be evaluated by their own standards and respected for the lives they led. We, for our part, can point out how the past is a foreign country.

What’s more, the essence of historical fiction is to remember that, while you know what happened to the characters, they don’t. As a character, in ignorance, moves towards their fate, so the reader’s dread increases. You’re trusting in your readers’ knowledge.

One final question from James Naughtie to these “two great mistresses of historical fiction” – who also just so happen to be great friends. “What keeps you going?”

Pat Barker: “As my husband used to say to me: if you’re not writing, you’re no good!” He also used to say that if he came from work to find Pat vacuuming, he would know she’d had a bad day.

Hilary Mantel: “The thought of Pat Barker. If she can complete a trilogy, so can I!” 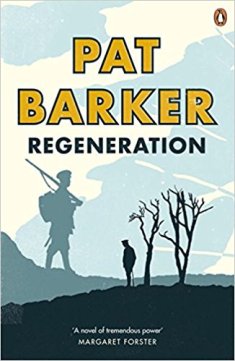