“Life could have gone very wrong indeed”. Roger Daltrey on the route from childhood adversity to being named one of the 100 greatest singers of all time

The consummate rock ‘n roller. That’s how I think of Roger Daltrey: he simply oozes charisma. He has also lived the kind of life of which most of us can only dream – which would explain the packed house tonight at London’s Royal Festival Hall.

Daltrey was here to talk to The Guardian journalist Will Hodgkinson about his autobiography ‘Thanks a Lot Mr Kibblewhite’ – which I cannot wait to read. Surprisingly small, and clad in black jeans and t-shirt, The Who’s front man retains an impressively healthy head of hair and was on great form, regaling us with anecdote after anecdote of his childhood, musical journey and adventures in later life. Let’s start at the very beginning…

Roger Daltrey was born in 1944, during the height of the Blitz and one of the most difficult times this country has ever endured. Food was rationed, families had been torn apart – but Daltrey remembers his childhood fondly. “It was an extraordinary time in which to be born”, he told us – although looking back he can’t imagine what his mother and aunts went through every morning, venturing out of their air raid shelters in Shepherd’s Bush to find out whether or not their houses were still intact.

Even though Daltrey had rickets and was bordering on malnutrition by the end of the war, he says his family always felt wealthy because WWII “brought communities together and families became closer”. Bomb sites, apparently, made “amazing” playgrounds and provided endless wildlife spotting opportunities; health & safety these days would have a field day, but “that’s what childhood is all about”.

A “happy” childhood turned somewhat sour when Daltrey passed the 11+ exam and was sent to a grammar school. At the same time, his family moved to Chiswick, where he felt “divorced” from his old mates and “isolated” in a world that spoke a different language. “You rarely saw anyone walking down the street”, he recalled, “they were all in office jobs”.

Grammar school was not a good experience, although it did provide the title of his book. Despite his size, Daltrey was always willing to fight back and eventually found himself on the wrong side of the headmaster, Mr Kibblewhite, too many times. Finally, aged 14 and following six strokes of the cane on his bare backside, Daltrey was expelled with the headmaster’s words ringing in his ears: “I can’t do anything with you; you’re an unruly student. You’ll never make anything of your life, Daltrey!”

His hackles went up, Daltrey says, “and I thought: I’ll show you!” This was, he admits, the arrogance of youth – but he remains truly grateful to Mr Kibblewhite. “Without him, life could have gone very wrong indeed”.

A fascinating start to life – but what most of the audience wanted to hear about was Daltrey’s musical adventures with The Who: the band he founded and has fronted for the past 50 years. Of its original line-up – himself, Pete Townshend, Keith Moon and John Entwistle he says, simply: “We were four very different people”. Townsend’s talent was evident immediately: “He was unique; played chords that no-one else could manage”. Then, Keith Moon joined the band – and became the “key to the engine that fired up The Who”.

Initially, The Who were expected to play whatever their audience wanted – which they duly did. As time went on, and they realised they were “freer” playing blues and Motown, the band realised that they needed their own material. The Kinks were storming the charts with ‘All Day and All of the Night’ and ‘You Really Got Me’ – and The Who “copied” them with ‘I Can’t Explain’ which, to the band’s delight, reached number eight in the charts. Hot on its heels came ‘Substitute’ and ‘My Generation’: “So different from anything else”.

Daltrey spoke affectionately of The Who’s former management team, Kit Lambert and Chris Stamp: “the most creative managers ever”. Despite coming from completely different backgrounds (Lambert was Oxford-educated; Stamp came from Canning Town and was the brother of Terence), they worked well together. The duo’s motto was “This band can do more”.

‘Tommy’ was born out of that period and remains one of the achievements of which Daltrey is most proud: “There’s still nothing like it”. He spoke affectionately of Ken Russell: “If you had the pleasure of working for him, you would die for him” and of that period in general, when artists were in charge of the creative process.

Less happy were the problems within the band. All of the other band members were drug addicts and, wherever Daltrey stood on stage, he always knew when they “weren’t firing on all cylinders”. One particularly bad concert saw Daltrey flush Pete Townshend’s amphetamines down a toilet afterwards, causing the latter to attack him with, of all things, a tambourine. “It might sound funny, but those wooden slats smashed against your face hurt!”

For his part, the legendary Keith Moon went through a phase of passing out on stage – on one occasion, with a needle sticking out of his foot. “It was no longer funny”, admitted Daltrey.

The fates of Keith Moon and John Entwistle have been well-documented; Keith Moon remains most of the notorious hell-raisers ever. All these years later, Daltrey still gets choked up talking about him. “’I’ve always seen him as a hero”, he reflected, “Keith had an incredible character and took every element to the extreme: he could be hateful, spiteful, loving…”. A biopic of the “funniest man in the world” has been in the pipeline for years, but every writer commissioned has fallen into the trap of writing about The Who, rather than about Keith Moon.

“He had a vocabulary far beyond his education”, recalled Daltrey, wistfully – although he spoke less fondly of Moon’s infamous pranks, reported gleefully by the press. “And I remember, like yesterday, getting that call from Pete: “He’s only gone and done it, Pete told me – and I had no idea what he was talking about”.

Moon’s addictions had finally caught up with him, and he died from an overdose of sedatives. “It hit me like a hammer”, Daltrey told us, forlornly: “I felt totally helpless”. It was less shocking when John Entwistle died, says Daltrey, because he had heart problems “and he was very stubborn and wouldn’t change his lifestyle to help himself”. He was, though, the “quintessential rock star”.

Daltrey doesn’t strike me as a man with many regrets, but he confessed to regretting trying to replace Keith Moon with another drummer, a decision which led to a “traumatic period” and, consequently, a hiatus. But “I never thought it was all over – and I was able to have a little acting career, which made me happy”. The Who did embark upon a 25th anniversary tour in 1989, but didn’t properly reform until 1999, when Zak Starkey – “so special” – joined as their drummer.

He enjoyed writing his autobiography, says Daltrey, even though it brought with it the realisation that “There can’t be many more years in front of me”. That said, he is grateful to still be here – with his partner of 50 years – and to have brought “wonderful” children and grandchildren into the world.

I can’t help feeling that Roger Daltrey will outlive us all. If you can survive World War II, malnutrition, drugs, booze and rock n roll, it seems to me that this funny, thoughtful and passionate musician is going to be around for a good while yet. 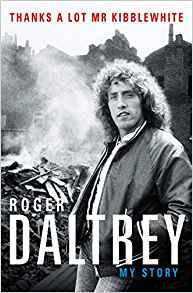