Back in the day, central London’s Victoria was a veritable wilderness when it came to entertainment – be it eating, drinking, shopping…you were likely to be disappointed. I used to work just down the road, in Westminster, and remember well the disillusioned faces of tourists trudging down Victoria Street, weary from their tours of the Houses of Parliament, Westminster Abbey and the Churchill War Rooms and looking forward to some hearty culinary fare – only to have it slowly dawn upon them that yes, they might only be moments’ walk from the biggest railway station in Europe, not to mention several of London’s most famous theatres – but no, the best the area had to offer was a couple of building societies and the odd newsagent.

Post-‘Friends’, a handful of coffee chains crept in, but with the exception of those and a couple of pubs, there was still nowhere you could get any decent grub.

All that has changed, though, over the past three or four years. First came an influx of high street chains, among them Top Shop, Monsoon, Zara, Jones, House of Fraser…my 22 year-old-self would be green with envy. There was, quite literally, one clothes shop on Victoria Street when I worked there: the Army & Navy Store (and if you have to ask what that is, you are far too young to be reading this post).

Cardinal Place, with its plethora of restaurants, followed – and all of a sudden the whole Victoria vibe changed. OK, so they were mainly ‘chain’ restaurants – Brown’s, Wagamama’s, etc – but this was still a vast improvement upon what was here previously. Cardinal Place also made Victoria a far more interesting place to explore.

And now, 2017 brings us…Create Victoria. And it was in this direction that we headed for dinner tonight – what a brilliant location, just two minutes’ walk from Victoria Station. The station and its surrounding areas have been transformed – they always had a lot of appeal, being close to the lovely, tree-lined squares of Belgravia and the quirkiness of Pimlico, but have lacked something for years.

The first thing that strikes you is that it’s apparent that a lot of thought and effort has gone into making Create Victoria a place that you will want to visit –seek out, even; the lighting, pictured below, is beautiful.

Big ticks, then, for the location and the aesthetics – but what, most importantly, to have to eat? Decisions, decisions: Create Victoria boasts over 20 restaurants, after all. In the end, we decided we were in the mood for Italian food – handy really, given that (unwittingly) we happened to be standing right next to an Italian restaurant. Serendipity? The fact that it happened to be Jason Atherton’s latest venture, Hai Cenato, just served to confirm that we had made the right choice.

Inside, the restaurant has a quiet glamour to it, but also manages to be both cosy and inviting. We sat downstairs in the restaurant itself, but there’s a great bar upstairs which had a real ‘Friday feel’ to it when I ventured up there later on – perfect for post-work drinks.

As for the food: well, the menu features some pasta options but is dominated by pizzas – but not just any old kind of pizza, you understand. Oh no. These are pizzas with a twist: sourdough bases embellished with the likes of artichoke, octopus, crème fraiche, lamb’s neck, home-made fennel sausage…and, if your wallet can stretch to it, truffle. With so many creative options on offer, making a decision was hard, but in the end, I opted for a Pizza Rossa featuring grilled Italian zucchini, goat’s curd, chilli, oregano, zucchini flowers, truffle honey and Parmesan – and Rebecca plumped for a Pizza Bianca starring mozzarella, guanciale, Cacklebean egg yolk, black pepper and confit Yukon potato. All I can say is it just as well we were hungry because when our pizzas turned up, just a few minutes later, they were MASSIVE. 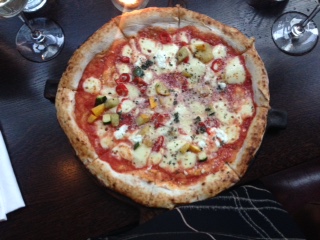 I really enjoyed mine – despite its size, the dough was light and I loved the blend of vegetables and flavours, particularly the truffle honey, which elevated it to another level. Rebecca liked her pizza, but found it somewhat overloaded with potato – and I could see why, it was absolutely covered with the stuff; you’d need to be in training for a marathon to be able to put away that much carbohydrate. The Cacklebean egg yolk was an inspired touch, though.

All I need to say about our desserts, a chocolate & coffee fondant with butterscotch, and a raspberry sorbet, is that they were divine – the photos below don’t really do them justice. 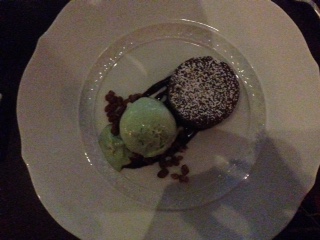 Overall, this was a very good dining experience. My only quibble was with the wine list: other than the house wine, which was £21 a bottle (so not exactly cheap), all of the bottles were priced at £30 and upwards. Ouch. And is anyone really going to pay £280 for a bottle of wine to drink with pizza, even if it is personally recommended by Jason Atherton himself?

That aside, the friendly service, inspired vegetarian options and open kitchen, where you can watch the chefs at work, mean that I would definitely return. And it was refreshing to see Hai Cenato eschewing table-turning; let’s hope that other restaurants follow sui