At home with Charles, Camilla – and a veritable menagerie: what life inside Clarence House is really like 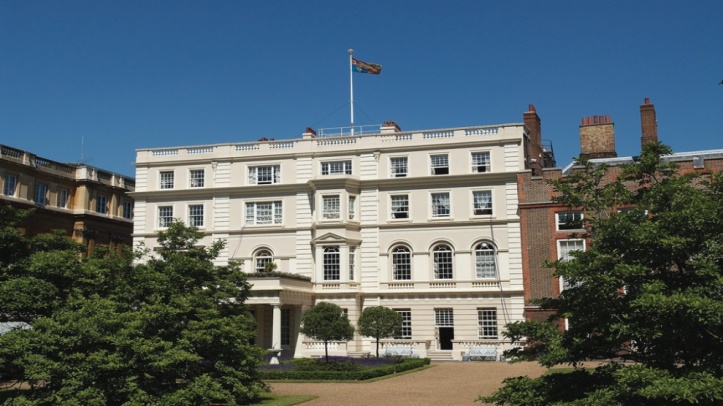 “You’ll see that this is very much a family house”, observed our guide at the beginning of our tour – and on balance, I’d have to say that she was right. Clarence House has a lived-in, cosy feel that you can’t imagine in somewhere like Buckingham Palace.

That said, on the tour we only saw inside five rooms, so I’m not sure how representative of the rest of the house they are; read on, though, if you’d like an insight into the living arrangements of the Royal Family.

A stone’s throw from Buckingham Palace, with Lancaster House with its neighbour, Clarence House was built in 1827 for William IV and designed by John Nash. Seven generations of the Royal Family have lived here since then – and while it is now best-known as the London residence of Charles and Camilla, it’s the presence of the late Queen Mother that is most felt.

And nowhere more so than in her former sitting room, now called the Morning Room. Painted in the pale colours of which she was so fond, the Queen Mother’s blue & bluff colours also play a significant part in the décor. Countless works of art adorn the walls; the QM was an avid art collector, but purely for the love of art and not for its value, we were told. Illustrating that point is a rather fabulous Monet which the QM’s advisers had advised her against buying, believing at that time that Impressionist art would never appreciate in value. It’s fair to say that the QM had the last laugh; she went ahead and bought the painting for £2,000 – today, it is worth £15 million.

Scattered around this somewhat cluttered room are family photos and portraits, a bust of the QM’s husband, King George VI, and a number of ornaments that are, how can I put this, unusual. Hens, rabbits, chickens…it’s clear that the Queen Mum was an animal lover. She used to hold lunch parties in here, and the room does have a convivial feel.

The Library, too, was used by the QM for socialising. Smaller in size than you might expect, it contains an eclectic range of books: everything from military history to biographies and religious tracts. Unsurprisingly, there are lots of Dick Francis novels on display; he was one of the many friends who the QM entertained in here with afternoon tea. Apparently, once the guests were seated and tea had been laid out, the footmen would discreetly depart, leaving the QM to take over the tea-pouring duties and allowing her and her guests total privacy. Like the Morning Room, the Library is cosy and inviting.

Not so the Dining Room, which is far more formal and much darker, filled with mahogany furniture – and in which we did not linger long. Even the paintings are gloomy; this, you sense, is a room associated with duty and not with pleasure.

You also get the sense that the Royal Family don’t like to throw anything away. The former Equerries’ Room – now the Lancaster Room – is chock full with furniture and ornaments: sofas, armchairs, coffee tables, stools, books and framed photos, the most eye-catching being one of Charles with Barack Obama. Every inch of space is covered – literally. The room itself has an interesting history, having been used as the HQ of the British Red Cross’s postal service during WWII, until it suffered extensive bomb damage.

My favourite room of all, though, was the Garden Room. Not just because of its baby grand piano, which has been played by the likes of Noel Coward and Elton John, or its stunning Harp, which only the Royal Harpist may use – but because it is light, airy and thoughtfully furnished. A giant tapestry which belonged to Queen Victoria hangs at the far end of the room, and the most beautiful lacquer cabinet that I’ve ever seen, gifted to Charles by the QM in her will, stands proudly at the other. I was tickled, too, by the “corgi doors” which lead out on to the gardens – talk about attention to detail.

Animals play an important role in the lives of the Royals, that’s for sure. I had forgotten just how much of a horse racing lover the Queen Mother was until we walked down Horse Corridor. Statues, paintings, portraits and photos, all of horses and their jockeys – the mind boggled.

Once outside, we paused to admire the black ‘Birthday Gate’ in front of which the QM used to stand, on her birthday, to receive gifts from well wishers. It’s also the spot from which William and Harry departed for Westminster Abbey on William’s wedding day – and to which William and Kate returned in their Aston Martin.

That, then, was it for the tour: most of the garden is blocked off for private use and we didn’t get to see, for example, the vegetable patch which supplies most of the vegetables used by Clarence House kitchen – although we did walk past a tree planted by the Dalai Lama.

Overall, an interesting experience – but, it has to be said, brief. We saw inside precisely five rooms and there was no time to browse – our guide was excellent and answered our questions knowledgeably, but there’s no getting away from the fact that the tour does feel like a bit of a money spinner (the fact that it ends by the Clarence House shop says it all). We weren’t allowed to take photos, either inside or outside, “because this is a private residence”.

Hmm. I’m not so sure I subscribe to that thinking. It seems to me that if you’re going to charge people an admission fee to enter a building, whisk them in and out and then strongly encourage them to buy bars of royal soap at £15 a pop you’re on shaky ground in talking about privacy.

I’d better end my musings there (don’t want to get sent to the Tower), so will conclude by saying that, despite those slightly negative aspects I did enjoy my time in Clarence House and would encourage anyone with an interest in history or the Royal Family to visit – just keep in mind the above, so as not to be disappointed.