Jane Fonda on politics, protests – and the secrets to a happy life 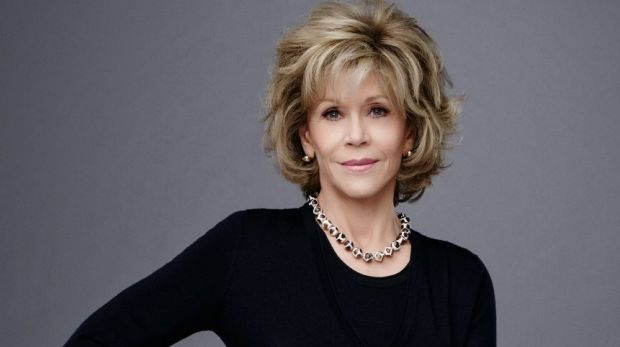 I’ve always admired Jane Fonda – both as an actress and as an activist – and watching her being interviewed tonight by Graham Norton, in the stylish surroundings of the Savoy Theatre, was a joy.

It’s hard to believe that this glamorous grandmother will turn 80 shortly; she looks amazing. Refreshingly, she admits to having had some plastic surgery, but says what’s most important is keeping yourself fit – “oh – and maintaining a positive attitude; that’s vital – and you need to work at it”.

During her career, Jane has had many meaty roles and sometimes you forget that it was roles in light comedies such as ‘Barbarella’ and ‘Barefoot in the Park’ which propelled her into the spotlight. “Which of your films do you think established you as a heavyweight actress?”, asked Graham Norton. “’They Shoot Horses, Don’t They’”, responded Jane, immediately. “People got to see a different side to me – and it won me my role in ‘Klute’”.

We then watched the final scene of ‘Klute’, which is incredibly powerful – I won’t give anything away, but recommend seeking this film out if you haven’t seen it before. Of this scene – in which Jane doesn’t actually speak, the entire scene is based around the different expressions flitting across her face – Jane told us she did no specific preparation; her tears came from thinking about the many women who’ve suffered abuse from men, in the way her character in the film had.

It was at that moment, “I realized my activism would make me a better actor.” And yet, Jane hadn’t believed she was the right person for this role: having met and spent time with a number of call girls in preparation for the film, she feared she wouldn’t be able to replicate the “emptiness” she spied within them. She even tried to persuade the film’s director, Alan Pakula, to give the role to Faye Dunaway; luckily for Jane (and for us), he refused – and Jane went on to win her first Oscar.

And then, just as her career was reaching stratospheric heights, came the Vietnam war – and Jane’s infamous visit to Hanoi in 1972, during which she was photographed sitting on an anti-aircraft gun, an incident which led to her being vilified both at home and abroad. It was interesting, seeing Jane’s reaction when Graham Norton asked her about this; she was visibly emotional. Declaring that she has no regrets about protesting against the war itself, she told us that the anti-aircraft gun event was taken completely out of context; having been asked to take a seat by her host, she realized almost immediately how it would look to the outside world. It was too late, however – the photograph had been taken and the damage was done. “It was the opposite of what I intended, and of what I believe in – and I shall regret that moment until my dying day”, she stated – and I believed her.

Some time after the war ended, Jane met with a group of American veterans to talk through the above events and try to make peace with them (this meeting was the subject of an excellent play I saw last year). Initially a tense encounter on both sides, she and they did, ultimately, end up understanding each other’s viewpoints.

That said, Jane remained “unemployable” for a considerable period, eventually achieving a comeback with ‘Fun With Dick and Jane’. Her star was soon in the ascendancy again, and in 1978, she won a second Oscar, for ‘Coming Home’.

Of course, it isn’t just acting for which Jane is famous. Who could forget those 1980s keep fit videos – or the colourful leotards? A staggering 17 million people purchased one of those tapes – and Jane remains the highest-ever seller of VHS videos. “I was lucky”, she told us, modestly, “the timing was great – but it was a complete fluke.”

More highly-successful films followed, including the wonderful ‘9-5’ (there can’t be a woman alive who doesn’t love that film). Mind you, it might have been one of the highest-grossing films of the 1980s, but it took Jane a full year to persuade Lily Tomlin and Dolly Parton to accept roles in it, during which time the script changed from a serious drama to a comedy with a serious message. The rest, as they say, is history.

Just like her professional life, Jane’s personal life has had its ups and downs. She described her relationship with her father, the actor Henry Fonda, to us as “difficult” – and listening to her talk, very honestly, about him, you got the sense that it has taken her a long time to process her feelings about her family (perhaps understandably, she made no reference to her mother, who committed suicide when Jane was just 12 years old). “I adored my father”, she told us, “but he was of that generation which could not show affection or love.”

Jane says that she feels “blessed” that she and Henry were able to make ‘On Golden Pond’ together, especially as he died just five months after the film’s completion. “By then”, she says, “I knew he knew I loved him.”

Romantic relationships, too, have been fraught at times. “I chose men who I thought were the opposite of my father – but they all turned out to be incapable of intimacy”, she said wryly. Perhaps surprisingly, for someone who comes across as so self-assured, Jane admits to finding it difficult to stand up for herself in relationships: “I had to become single again before I could become an authentic feminist.”

I suspect that, ultimately, it is for her activism that Jane will best be remembered – and am certain that is what she would want. Jane’s current focus is on ridding the American people (and the rest of the world) of Donald Trump, and his policies. Her fear is that Trump is the symptom, rather than the problem: “Unless we do something about it, Trump may go – but Trumpism will continue”, and she laments Hillary Clinton’s failed election campaign. Jane respects and admires Hillary (and donated money to her campaign) but believes that the Democrats were far too dismissive of their traditional, working-class base: “We’ve forgotten about people’s real needs.”

What, then, does the future hold for Jane Fonda? Another series of ‘Grace and Frankie’, definitely – plus, she has just made a film with Robert Redford and is keen to carry on working – but more, she says, to fund her activism than to extend her career. Most of all, Jane says, “I don’t want to die with regrets. And I want my family to know that I love them.” Wise words indeed from this complex and inspirational woman.