‘Soutine’s Portraits’, currently showing at The Courtauld Gallery, tells a fascinating story, in relation to both the painter and his sitters. Soutine’s was a real-life rags-to-riches tale, filled with moments of joy and of abject despair – and one with which, until today, I was not all that familiar.

Born in Belarus, in 1893, Chaim Soutine hailed from humble origins and was one of eleven children. In 1910, he moved to Vilnius, where he studied at the Vilna Academy of Fine Arts. From there, he emigrated to Paris, where he continued his studies at the Ecole des Beaux-Arts. Living with, and inspired by, other artists – including his close friend Amedeo Modigliani – Soutine soon developed his own unique style of painting. It was during this period of his life that he began painting portraits.

It is upon these early portraits that the exhibition focuses – and they are just as intriguing as their creator, partly because Soutine’s subjects were not who you might think they would be. Glamorous and cosmopolitan 1920s Paris may have been, but Soutine was far more interested in the “workers” of the city: the cooks, waiting staff and shopkeepers, and the boldly-coloured uniforms that they wore. He duly embarked upon a highly original series of portraits depicting staff from well-known hotels and restaurants – in particular, pastry chefs, whose brilliant white uniforms fascinated him:

In 1923, came one of those strokes of good fortune of which everyone dreams: the eagle-eyed American collector Albert C. Barnes fell in love with one of Soutine’s pastry chef portraits – and promptly purchased over 50 of the artist’s canvases. Soutine was now a major painter, talked about in the same breath as Van Gogh and Cézanne.

Looking at his portraits, you can understand why. I was bowled over by Soutine’s use of colour and also by the way in which he draws out the personality of his sitter. Interestingly, despite his fascination with the world of grand hotels and fashionable restaurants like Maxim’s, Soutine rarely painted his subjects in their workplaces, preferring them to come to his studio, where he could focus upon their physical features. In most of the portraits I saw today, the background is indistinct – it’s the human being that he’s interested in.

It’s also interesting that, despite his new-found wealth and acceptance into the upper classes – which gave him first-hand knowledge of the golden age of grand hotels – Soutine continued to identify with the people who worked in them, rather than those who patronised them.

There’s no doubt that the portraits are compelling. I’ve already mentioned Soutine’s spectacular use of colour, but another notable element of his work was his obsession with physical distortion: Soutine would fixate upon certain features, believing that this led to a truer expression of a sitter’s appearance than in a conventional portrait. Below is a good example: 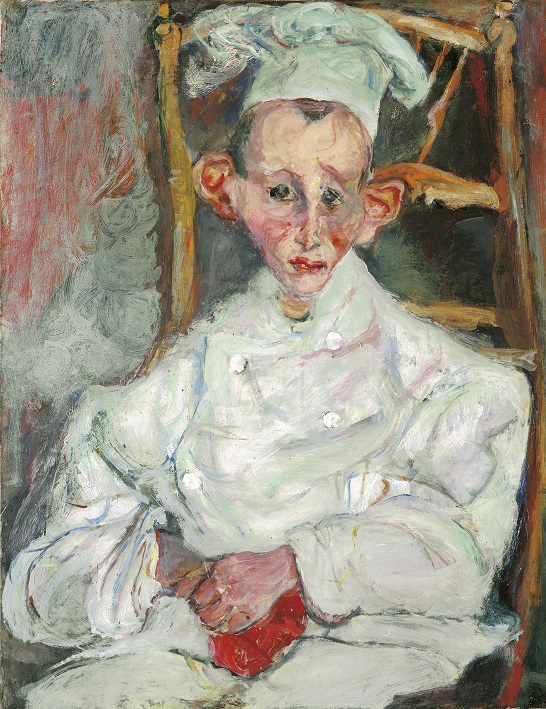 You can learn a lot about the history of the period from these portraits. I now know that page boys wore red uniforms and were an ubiquitous feature of Parisian hotels and restaurants such as Maxim’s. I also learned that, in the finest hotels, a garcon d’étage would be assigned to a particular floor in a grand hotel to serve guests in their private suites. Soutine painted a number of these garcons d’étage, who were typically drawn from the most stylish and good-looking young men of the restaurant staff.

Depictions of a privileged world, then. By the 1930s, however, Soutine’s interest in hotels and restaurants was waning and he turned his attention to female domestic servants. A small number of these portraits are included in the exhibition and I found them far more subdued than Soutine’s early works; a reflection of the changing times and the beginning of the disappearance of this world of privilege. With the Wall Street Crash of 1929, and with war clouds looming on the horizon, the world was beginning to look a very different place.

Particularly so if you were Jewish, like Soutine. This exhibition concludes during the early 1930s, drawing a veil over its artist’s latter years – which would, sadly, be marked by fear and, ultimately, tragedy: after the Nazis invaded France, in 1940, Soutine had to flee Paris and lived life permanently on the run, often sleeping rough. His health deteriorated rapidly and, despite risking everything and returning to Paris for help, emergency surgery on a perforated ulcer could not save him. Chaim Soutine died on 9th August 1943, leaving behind him a legacy which continues to enthrall and inspire.