A Book Brunch with Anna Mazzola and Natasha Pulley

Literary festivals are springing up all over the place at the moment, much to my delight – you can never have too much of a good thing, after all. The latest to catch my eye is the Balham Literary Festival, which I visited today to hear authors Anna Mazzola and Natasha Pulley discuss their new novels and mutual appreciation of historical fiction.

I will be honest from the outset and say that this is not quite the post I had intended to write. Having spent the past few days taking exams (including one yesterday), my brain is somewhat frazzled and I didn’t note down as much of Anna’s and Natasha’s conversation as I would have liked. That certainly isn’t their fault – both women were hugely engaging and I loved listening to them. In this case, however, the spirit was willing but the flesh undeniably weak (not to mention hell-bound on consuming the delicious carbohydrates provided as the Brunch element of the event).

A word, first, about today’s venue: Balham Bowls Club. Once a highly-respected club house, it has been taken under the wing of Antic London and converted into a gorgeous public house at the heart of the Balham community. Sympathetically restored, it retains much of its original décor, sporting memorabilia and quirky trinkets and made the perfect setting for this talk.

Anna Mazzola and Natasha Pulley are relative newcomers to the writing scene – but both made an immediate impact. Both, coincidentally, read English at Oxford, but followed different paths afterwards, Anna becoming a human rights lawyer and Natasha entering the world of publishing. Anna, who describes herself as “drawn to peculiar and dark historical subjects”, published her debut novel ‘The Unseeing’ in 2016. Set in 1837, it tells the story of Sarah Gale, a seamstress and mother, sentenced to hang for the murder of Hannah Brown on the eve of her wedding. Based on a true story, it drew immediate comparisons with Sarah Waters. I can’t believe I missed it first time around and will definitely be seeking it out.

Anna is following this up with ‘The Story Keeper’, due out next month. Its setting is the Isle of Skye, where a community devastated by the Highland Clearances gives a hostile reception to Audrey Hart, visiting Skye to collect folk and fairy tales. Tensions run even higher when Audrey discovers the body of a young girl washed up on to the beach and begins to investigate. 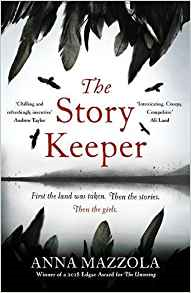 One of the reasons I love historical fiction is the opportunity it provides to learn about an event or an era. I freely admit to knowing very little about the Highland Clearances (I’m not sure reading their Wikipedia page really counts) so I’m looking forward to finding out more.

As for Natasha, she is one of the wittiest interviewees I have ever encountered. Just 27 years of age when she published her début novel, ‘The Watchmaker of Filigree’ (as well as sporting one of the most beautiful dust jackets I’ve ever seen) won a Betty Trask Award and was shortlisted for countless other awards. This success, says Natasha, has been a curse as well as a blessing – it was “wonderful” to receive so much acclaim, but heaped pressure on her as regards her follow-up, ‘The Bedlam Stacks’; sweetly, Natasha describes herself as “terrified” that it won’t do as well. You have to separate what you’ve already published from your current project, is the conclusion Natasha has come to, saying she can never bring herself to discuss her new writing with anyone. 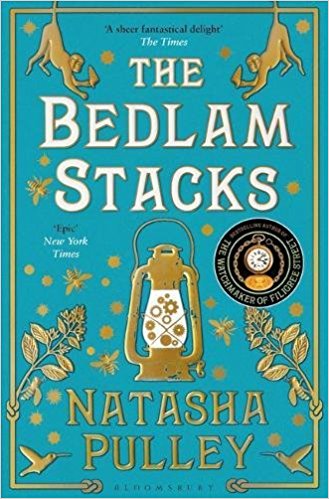 Here, she differs from Anna, who enjoys discussing potential plots with other people. Both authors agree, however, that accepting feedback and criticism goes with the territory.

They are equally resolute on the subject of research – “essential” to any writer of historical fiction. For example, ’The Bedlam Stacks’ is set in Peru and based around the India Office’s quest for quinine. Thanks to a Society of Authors grant, Natasha spent three months in Peru “travelling the breadth of the country and learning Spanish” and I have no doubt that her experiences will inform this novel in the most beautiful way.

To wrap up proceedings, Anna and Natasha were asked why they choose to write fiction set in the past:

Anna: “It’s a route into another world – and I love finding out what people’s lives were like in the past”.

Natasha: “I live contemporary life. Writing about the past is my escapism, a way of getting away from it”.

Footnote: Natasha then had the audience in stitches by proclaiming that being an author is like being a geisha – you represent a world (in this case, publishing) that most people never get to see! A fitting end to a highly entertaining conversation.