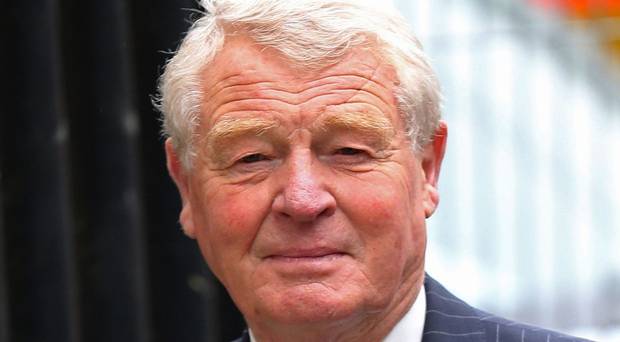 There are politicians who, however hard they try, are never able to win the affection of the public. And then there are politicians like Lord Paddy Ashdown, who, whether or not you agree with his views, are greatly respected by people of all political persuasions. Tonight, I saw him being interviewed in the latest of the China Exchange’s excellent ’60 Minutes With’ series.

Fighting fit at 77, former Liberal Democrat leader Paddy (as he insists on being called), continues to campaign and advise, as well as pursuing a writing career – his ninth book will be published this October. And yet, he says, none of this was planned: all of his careers, as a Royal Marine, business man, politician and diplomat happened “by accident”.

Paddy was being somewhat disingenuous, I suspect: a septuagenarian he may be, but he is clearly incredibly driven and, one imagines, doesn’t suffer fools gladly. I imagine, too, that few of those illustrious personages interviewed at the China Exchange to date can actually speak any form of Chinese. Paddy, however, is fluent in both Mandarin and Malay.

To put this into context, let’s travel back in time to 1959, when an 18-year-old Paddy was posted with the Royal Marines to the Far East. Spells in Malaysia, Singapore and Borneo enabled him to learn several languages, the Borneo posting acting as a particular incentive: “I was living in a region which no white man had visited for 50 years, with a tribe of head hunters, who proudly displayed their victims’ heads around the village – it seemed like a good idea to learn their language”.

Paddy eventually returned to the UK in 1974, “with the country in a hell of a mess” and the Liberals facing various challenges, not least that their leader, Jeremy Thorpe, was about to be implicated in a plot to murder his lover Norman Scott. “This was not, by any means, a great career move for me”, commented Paddy, wryly, noting that it took him eight years and two spells of unemployment to win his seat in Yeovil. “But I hate the word ‘impossible’ and I like to devour life; everyone needs to be passionate about something. The biggest sin in life is apathy”.

There were precious few opportunities for apathy in the years that followed, as the Liberals battled to reinvent themselves as a force to be reckoned with. Luckily, Paddy possesses both self-belief and a sense of humour, cracking a number of pretty funny jokes during this interview. “Oscar Wilde said that, in a democracy, the minority is always right”, he beamed at us, before adding, in sadder tones, that he believes the UK to be in as much of a mess and as much an object of derision as when he entered politics 43 years ago.

Paddy’s life changed again following the 1992 general election, when a colleague suggested that he visit Bosnia – not a part of the world that he knew well. “I was pole-axed by what I saw and in particular by the death camps”, he reflected, still clearly emotional about the experience. “I came home certain that, as with the Spanish Civil War, the political classes did not understand the gravity of the situation”. Indeed, the Labour Party called Paddy a “warmonger” for arguing for NATO intervention in Yugoslavia – but Paddy’s passion for the cause remained undimmed and in 2000, after he stood down as party leader, the then-Prime Minister Tony Blair asked Paddy to go to Bosnia and Herzegovina as its International High Representative.

With this role came a lot of power, which Paddy found “frightening”: power, he says, can be corrupting – something of which he was always mindful. Nonetheless, he did dismiss people from their posts, including two directly-elected presidents who were refusing to co-operate with The Hague regarding the trials of war criminals.

Returning to the present day and a member of tonight’s audience asked Paddy who, in the House of Commons, inspires him. Having started out in politics at a time when “giants” such as Denis Healy and Margaret Thatcher roamed the corridors of Parliament, Paddy admits to being “shocked” at the lack of such giants these days; none, he says, are emerging, despite the huge problems this country faces. “Politics is in a bad and dangerous state”, he mused, bemoaning the fact that the vast majority of today’s politicians have no life experience outside politics.

Another audience member pointed out that, since 2010, we have had two hung parliaments. Can any party win outright in the future? To this, Paddy would not commit himself – but he did comment that, whilst he believes the Conservative-Liberal Democrat alliance to have been an alliance that history will remember favourably, today’s Conservative-DUP alliance is “dangerous and damaging”.

Also on the subject of coalitions, Paddy told us that his biggest political regret is his decision, in 1997, to “gang up” with Tony Blair on John Major (who is a good friend) and encourage the public to vote tactically so that a coalition could be achieved. He and Blair did this because they believed a voluntary coalition would be better than a hung parliament – but they were stunned at the huge landslide won by Labour. The day after the general election, Paddy met with Tony Blair and Roy Jenkins to discuss said coalition, but ended up agreeing that such a large majority would create an undemocratic parliament – a decision Paddy now regrets as a “gross strategic error”.

Of course, we couldn’t end an evening of political debate without asking Paddy for his views on President Trump. “Never trust a politician with a big hairstyle!”, he retorted, before going on to express his concerns about “the most isolationist president the U.S. has ever had” being at loggerheads with an “incredibly aggressive” Russian president. For the time being, he says, Britain will have to manage without American support – which makes the case for Brexit even weaker.

“But I continue to believe in the greatness of the human spirit – and I remain an optimist”, Paddy concluded. “You can’t be a Liberal Democrat and not be one!”