St James’s is one of my favourite parts of London. From its luscious green parks to its eclectic mix of galleries and museums, from its twisting, mysterious side streets to its iconic shops and malls, it has something to offer everyone. Redolent with history (St James’s is where Henry VIII built his London palace, during the 16th century), it’s impossible ever to get bored here.

Unsurprisingly, the area also plays host to a number of fabulous hotels – some very well-known, like The Ritz, and some which, perhaps intentionally, maintain lower profiles, but which are equally charming. Dukes, I would hazard a guess, falls into the latter category – and it was here that we headed for afternoon tea, another popular feature of St James’s.

Dukes’ website boasts that “you’ll arrive as a guest and leave as a friend” – a little cheesy, perhaps, but – actually – true. Tucked away on St James’s Place, this boutique hotel provides the warmest of welcomes: we were treated like royalty from the moment we arrived to the moment we (reluctantly) left.

Glamorous in an understated way, it’s a fair bet that Dukes has entertained quite a few famous faces between its four walls over the past decades. En route to its drawing room, where tea is served, we peeped into the legendary Dukes Bar – renowned for its martinis, and for being Ian Fleming’s favourite haunt when he was in town.

It being somewhat early in the day to get stuck into martinis, we settled ourselves very comfortably in the hotel’s elegant yet cosy drawing room and prepared to enjoy the sumptuous feast that was laid out before us. Dainty finger sandwiches, scones (still warm!) with clotted cream and home-made strawberry jam and a selection of the prettiest cakes you’ve ever seen: a treat for the eyes, as well as for the stomach. Nor did they stint upon the portions: every time we managed to polish off one plate of food another, as if by magic, appeared. I got stuck somewhere around the second plate of scones; Lynda, being somewhat more restrained than me and eschewing second helpings, was able to plough on heroically and reach the cake stage: “They’re very nice indeed”, she assured me, through a mouthful of ganache. 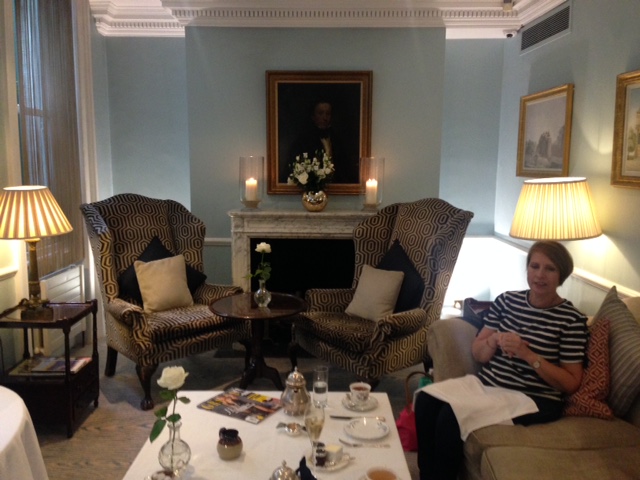 I’m still unable to establish exactly who came up with the concept of afternoon tea. Some say it was Anna Russell, Duchess of Bedford and close friend of Queen Victoria; others, that the tradition dates back to the time of Charles II and his tea-drinking wife Catherine of Braganza. No matter. Long may this most British of traditions continue, and long may Dukes continue to thrill and delight with its mouth-watering scones and memorable martinis. James Bond, most definitely, would approve.