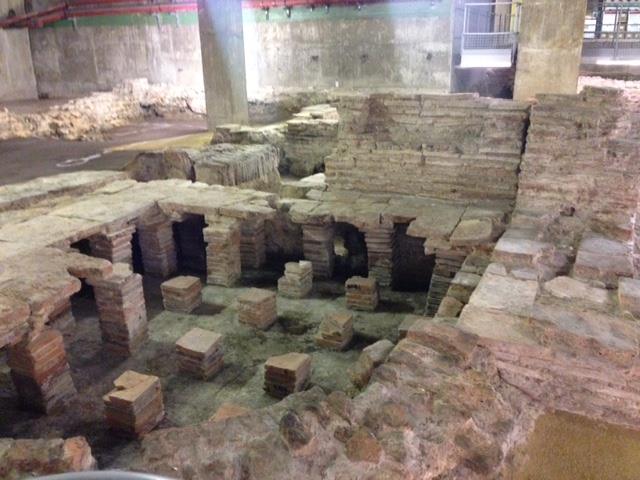 I went on a fascinating tour of Billingsgate Roman House & Baths this morning, an archaeological site located along Lower Thames Street in the most unlikely of places, directly beneath an office block. Originally discovered by the Victorians (who, unusually for them, decided not to demolish it), the site is now owned by The City of London Corporation and remains, thankfully, a protected area.

Seeing the site for the first time is a real “wow” moment, so unexpected is it when you come upon it. Knowing that it has been there since c.AD 380 (the discovery of a stash of Roman coins enabled historians to identify the era) sends shivers down the spine. But this is what I love about London. You can be going about your daily routine: on the way to work or the hairdresser’s or the gym…whatever…and doing so completely oblivious to the fact that there is an entire other world located just metres below your feet.

Incredibly, the foundations of the Villa remain intact, as do those of the Baths – indeed, you can see where, as our brilliantly knowledgeable & enthusiastic guide put it, Roman bottoms once sat. This is a real journey back in time; you truly feel you are entering another world.

That said, plenty of questions remain unanswered for anyone interested in Roman history. Why is the standard of architecture of the “newer” part of the Villa (the “extension”, as it were) lower than that of the original building? Did cowboy builders exist even back then? And why is the frigidarium so tiny in comparison with the rest of the baths? Was it a design defect or a genuine reason which we’re yet to uncover? The layout of the baths are different from most of the Roman baths we’ve unearthed – why is this? Does the proximity of the Thames play a part? So much remains for us to find out – one day, hopefully the pieces of the jigsaw will come together. In the meantime, there’s a lot of fun to be had in weaving the strands together.

Unusually for sites such as this, the only personal item discovered in the Villa (excepting the coins) was an Anglo Saxon brooch. Yes – Anglo Saxon, as opposed to Roman, leading to even more questions. What was its owner doing there – and why would she have left her brooch behind? Bear in mind that brooches of that era were not merely jewellery, they formed an essential element of the traditional female garment, pinning it together – in other words, its owner would have known that she had misplaced it. So why was the brooch in the Villa, without any trace of its owner?

As you can tell, my imagination was well and truly fired by this morning’s visit and this is just the first stop on my Roman pilgrimage. On our visit this morning we were given a guide to all the other Roman remains in London, and I will be working my way around them: rest assured that you will be hearing much, much more from me on this subject…